If you don't have this installed, ACARS will prompt you to download it. But if you want to download ahead of time, visit the Download Page from Microsoft, and select the x64 version for Desktop apps

After downloading the zip, just extract the client into a folder (e.g, on your desktop into a folder called ACARS). Then you can create a desktop shortcut from the acars.exe for easier access.

To use FSX/Prepar3d, you need to install:

After installing both, run MakeRwys. MakeRwys also needs to be re-run whenever there are scenery changes (if you want gates/runways to be updated).

X-Plane uses a custom plugin. Open the X-Plane folder, and copy the AcarsConnect folder into your Resources\plugins folder.

If you're using Microsoft Flight Simulator, then to read the LVars from the sim, you need the FSUIPC WASM Module (Version) + WAPI (Version) from FSUIPC

To use MSFS, select "Microsoft Flight Simulator" from the simulator list and you will have two options:

If you're getting a permission denied error, see this thread

Get the URL and API Key​

You can either enter your URL and API key manually, or download the settings config file from your phpVMS profile. To download the config file, visit your VA and go to your profile:

And place it a folder called My Documents/phpVMS:

After downloading the latest ACARS version, on startup, you'll be brought to the configuration/settings page: 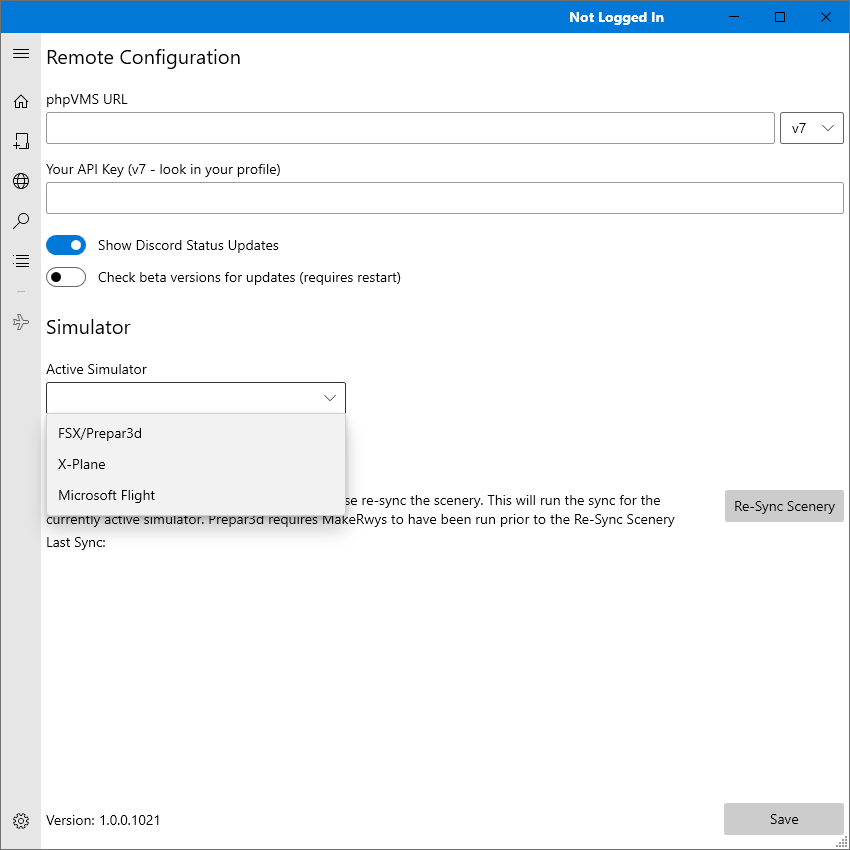 FSX/Prepar3d requires the MakeRwys.exe file, which can be downloaded from the FSUIPC Page. It needs to be placed in the same directory as FSX/Prepar3d, and it will create the required files needed to scan.

After selecting the directory, click Re-Scan Scenery. This will load the scenery database into ACARS for it to run/load later

To run ACARS with X-Plane on the Mac or Linux, you have to run Windows in a VM. On the Mac, I use VMWare Fusion, which is free for personal use. The procedure below will be similar for Parallels or Virtual Box, which is roughly:

In order to get the scenery scanning working properly, add X-Plane as a shared folder:

Then click "Open In Guest", and you can follow the above instructions for then installing the plugin. Then, in ACARS, properly set the "Scenery Path" and IP to your Mac machine:

If you configure it to point to the X-Plane root, the default share path for VMWare Fusion would be \\vmware-host\Shared Folders\X-Plane 11. 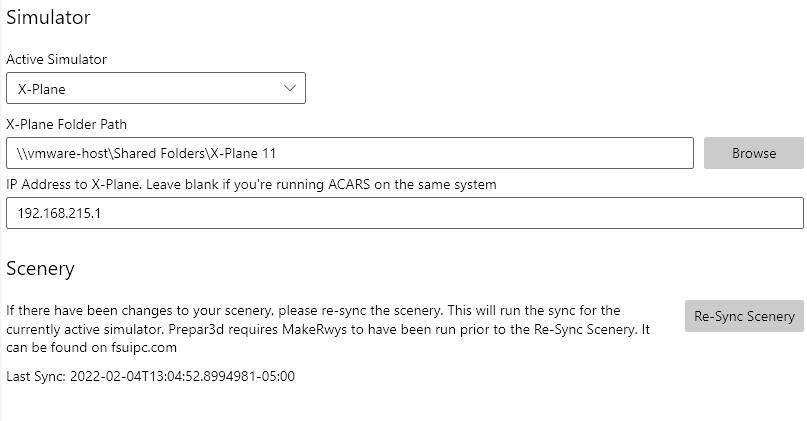 Then you can launch/run ACARS as usual.

If you're using hardware to control the sim, ACARS heavily relies on several offsets with FSUIPC, particularly the parking brake. Ensure that the offset 0x0BC8 gets set

There are several ways to configure flight:

This is simple, just type in everything for your flight, referring to your VA site.

To load a flight from the search or bids, in the menu, select flight search. If your VA has search enabled, you can click search. If you click on "Bids", it will show your available bids.

If there is a SimBrief flight plan also loaded with the bid from the site, it will show up as "Yes" in that column.

In order for the route map to show all of your waypoints, you need to load a flight plan. vmsACARS does not have/contain any navigation information on its own, it's all loaded from a loaded flight plan. The follow flight plan types are supported:

The routes/navpoints are then loaded from the flight plan, along with the TOD (from MSFS/Simbrief), and filed along with your PIREP.

Lights and other features for aircraft may not work on all aircraft, due to the way developers differently implement the on/off switches/flags for these (for example, PMDG implements their lights differently for each aircraft). There is a ConfigMap.xml file that can be edited (make sure to create backups before updated - enhancements to this coming soon) which uses the aircraft name/title to determine which offsets (for FSUIPC) or data refs (X-Plane) are used to detect those features.

ACARS defines multiple flight phases, and the transitions between them are detailed below. These rules are attemped to strike a balance between detecting the phases properly for both IFR and VFR flights.